Nightwing, or Richard John Grayson (though most call him Dick) is the original Robin, all grown up. From 1940 to 1984 Dick served alongside Bruce Wayne as the second half of "Batman and - " until he decided he had outgrown his role as a teen sidekick, and struck out on his own. In Tales of the Teen Titans #44, Dick first put on the Nightwing suit, and the rest is history. 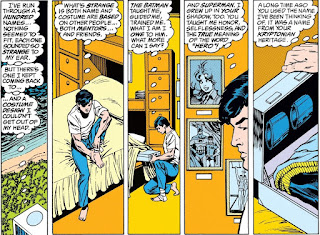 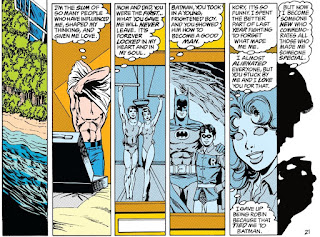 As the original sidekick, Dick Grayson can be seen as one of the Fathers of the DC Universe. He has existed longer than Wonder Woman, Green Lantern, Martian Manhunter, Green Arrow, Aquaman, and more. Without the success of Robin, there would be no Speedy, Wonder Girl, Aqualad, Kid Flash, Jason Todd, Tim Drake, Stephanie Brown, Damian Wayne, or Duke Thomas.

This history is also present within the comics canon, for Dick basically grew up in the superhero community. Where Bruce Wayne traveled the world to be trained in various disciplines from men like Henri Ducard, Dick was raised in a world where Batman was his teacher and father, and heroes like Superman, Hawkman, Wonder Woman, The Flash, and Green Arrow were but a call away. On top of this, Dick was also the leader of the Teen Titans, the first youth superhero team. Growing up in this environment exposed Dick to the best of the best in crimefighting, and allowed him to hone his leadership skills from a young age. This community that Dick fostered allowed him to build a support group beyond Bruce and Alfred, and led him to become one of the most well liked and trusted heroes in the DCU.

After Dick became Nightwing, his skills and reputation only grew. Over the years he became the de-facto second in command of the Batfamily, led teams like the Titans, the Outsiders, and the Justice League, and he forged bonds with other teams like the Birds of Prey and Young Justice. He was seen as one of the most trusted and gifted leaders in the DCU, second only to Batman in detective and combat skills. In the words of long time DC artist Phil Jimenez, "In many ways, even more than Superman or Batman, Nightwing is the soul, the linchpin, of the DCU. He’s well respected by everyone, known to the JLA, the Titans, the Outsiders, Birds of Prey – everyone looks to him for advice, for friendship, for his skills. He’s the natural leader of the DCU."
Nightwing is the character who decided to become his own hero after years of being a sidekick, and in the process he became the soul of the DCU. He is the product of an entire community of heroes, the child of the Silver Age. He represents the idea of forging your own path, doing things your way. It may be hard, but it will build your character, and show the rest of the world what you're made of. Dick Grayson is trusted by every other hero because he's put in the work to earn their respect. In Dick's own words, "You'll never know if you can fly unless you take the risk of falling!" 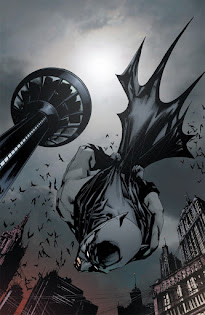 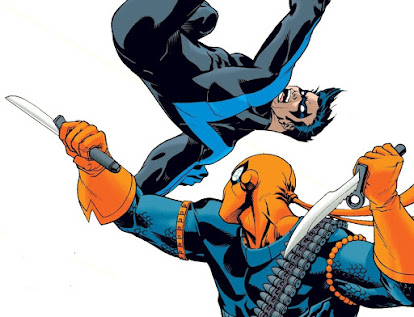